Back in 2015, a renegade troupe of comedians and filmmakers dared to prove that horror-comedies can be more than the subgenre’s middling reputation suggests. Fans of 5-Second Films’ viral videos on YouTube and at 5secondfilms.com probably already know about their crowdfunded fraternity-slasher satire Dude Bro Party Massacre III. Those who don’t won’t be hazed for missing either of the previous entries in the franchise — because they don’t exist. Dude Bro Party Massacre III is a faux-threequel that’s presented as if the audience is watching some sneaky Minnesota teen’s bootlegged VCR copy, recorded off a 4 a.m. “Midnight Morning Movie” showcase.

The main characters in this film are dudes. They’re bros. They love to party. They get massacred. It’s all in the title, except the way the Delta Bi frat’s booze-drenched story is also a brilliant take on well-documented horror tropes, made for an audience that’s both obsessively aware of sorority-house slashers, and ready for a loving analysis of why those movies are ridiculous.

A title like Dude Bro Party Massacre III is easy to write off as a gimmick, heralding a movie that’s going to be crammed with shallow horror-trope gags, like a Scary Movie sequel. Horror-comedies are often judged more harshly than straight horror, because so many self-serious horror fans either believe comedy can’t be scary, or have suffered through Stan Helsing equivalents that don’t seem to come from a place of respect and appreciation for the films they’re attempting to skewer. For every loving sendup like Ruben Fleischer’s 2009 horror-comedy Zombieland, there’s another braindead waste like 2014’s A Haunted House 2, seemingly built around the question, “What if Paranormal Activity had poop gags?”

But the knowing humor in Dude Bro Party Massacre III is a signal that the filmmakers are horror fans themselves. Targeting subgenre tropes is a strong route to making a good horror-comedy. Filmmakers who embrace these repetitive plot expectancies and extend them to their goofiest degrees are showing off their deep wells of horror knowledge, and their willingness to laugh at what they love. Assassination comedy is thoughtless, but this kind of compassionate comedy takes skill. Dude Bro Party Massacre III is the rare horror satire that’s both funny and intensely studied, with its slasher sendup filtered through buff brotherhood, beer bongs, and the lifesaving power of blatantly homoerotic friendships.

It all starts when Brent Chirino (Alec Owen) enrolls at East Chico University to investigate the murder of his twin brother, Brock. After skateboarding past a sunbathing John Francis Daley (one of the many recognizable faces that pop up in cameos, from Larry King to Nina Hartley), Brent crashes in front of the Solo-cup-littered Delta Bi fraternity house, where muscled alpha leader Derek (The Room co-star Greg Sestero) welcomes him as Brock’s legacy brother. Brent announces his interest in pledging to Delta Bi, as a cover for snooping behind their closed bedroom doors in search of answers about what happened to Brock.

By horror-franchise bylaws, this is the point where the film’s villain, Motherface (Olivia Taylor Dudley) will start killing once more. Motherface is the masked nightmare responsible for all the dead Delta Bi broskis from the imaginary previous movies in the series. Brent finds a new family at Delta Bi, but he can only save them by defeating Motherface in Brock’s honor.

At its most digestible, Dude Bro Party Massacre III inverts the sorority-house-bloodbath setup that dominates after-hours ’80s slashers like The House On Sorority Row, The Slumber Party Massacre, or Killer Party. Titillation and temptation are the fuel for Friday The 13th’s infinite copycats, many of which sacrifice character development in favor of bare breasts and pillow fights. DBPM3 asks, “What if this kind of framing was applied to men instead of women?”

The Delta Bi motto is “No Girls Allowed,” especially during the Delta Bi Biannual Bicep Gauntlet. The frat knuckleheads engage in familiar sorority-movie behaviors, like dancing topless around stereos, or nervously confiding in their closest brochachos about feeling pressured into sex by a persistently baby-crazy girlfriend. (Kelsey Gunn as Samantha is a star.) There’s no Driller Killer hunting pajama hotties with a phallic weapon, and no scorned ex-boyfriend stalking the woman he sees as his property. The role reversal is comic, but it’s also a stealth apology for all the objectification forced on women through decades of bimbo victim stereotypes.

Cut deeper into the hairless flesh of Dude Bro Party Massacre III, and the writing team’s intentions to roast slasher norms become apparent, especially in their sendup of absurd sequels. Brock’s introductory therapy session recaps the action from the imaginary first two films, through a montage of Delta Bi deaths that ooze vomit from sliced-open necks and spill aquarium tanks worth of blood as a commentary on the body-count carnage that seedier slasher films value over narratives.

Two otherwise unnamed characters, “Flannel Bro” and “Turtleneck Bro,” later make a passing Rosencrantz and Guildenstern reference to jokingly highlight the horror trope of unimportant supporting characters who serve as slaughter-fodder. Other horror signatures that surface here: nonsensical plot devices, and Motherface’s punny one-liners after she executes her victims. They’re all meant as odes to the tropes of horror movies that were poorly written even by 2 a.m. standards, watched through the tracking fuzz of a VHS tape.

The brilliance of these tropes is in what they hide. As much as Dude Bro Party Massacre III pleasantly manipulates its fraternity landscape to remind audiences that bros are capable of sharing emotional connections, the screenplay’s ultimate target is reflexive — it’s satirizing its own satire. Take Jimmy Galoshes (Jon Brence), who’s electrocuted because he can’t help but touch a deceased Tri Beta streaker’s bare breast — even though his rain boots spared him such a shocking fate two seconds prior, when Motherface drops a live wire into the puddle beneath his and the nude coed’s feet. The film doesn’t just approach ’80s slashers from a place of reverent throwback warmth, it tries to contextualize the toxically masculine industry that cranked out these gratuitous gore factories — and dares to demand a different path moving forward. (The “innocent horndog” character dies instantly, illustrating what the filmmakers think of that trope.)

The beauty of a horror-comedy is that thematic messages are easier to digest when we’re laughing. In 1985’s The Return Of The Living Dead, viewers can chuckle at America’s bureaucratic and military incompetence, even though it’s otherwise deadly serious. Subversions can take more significant swings, like the way 2011’s Cabin In The Woods rewrites how audiences see horror tropes by blaming a malevolent agency for every dumb prototype-character choice.

Circle back to DBPM3, and Brent’s level-up as a “Final Boy” captures his transformation into an untamable bodybuilder berserker when the ghosts of his dead bros enter his body — through his butt. The best visual metaphors hit like sledgehammers, but outside of this kind of humorous context, such daffiness could not endure. Reassessing ridiculous tropes by flawlessly reproducing them in order to laugh at them is a way to balance a takedown with an adoring acknowledgment, a proof that the creators know the territory they’re walking.

Dude Bro Party Massacre III is a madcap love letter to the horror genre, as evident by its deeply connected mode of spoofery as sincerity. Indulgence reigns supreme in Motherface’s kills, as she taps Spike’s (Michael Rousselet) skull instead of a keg, and pours him a bloody home brew. Indulgence also inspires over-the-top performances, like how actor Paul Prado excessively enunciates his lines as the Delta Bi’s resident hardass Turbeaux when it comes time to paddle hopeful pledges.

DBPM3 works through an entire library of slasher tropes, from the “split up the group” plan to Delta Bi’s reliance on dance numbers to relax in times of strife. The filmmakers generate characters by distilling Porky’s and Animal House-era stereotypes down to their skeletal arcs. Flannel Bro and Turtleneck Bro break the fourth wall to point out a continuity error. It’s a reassurance that everyone on and behind the camera is heroically committed to both honest satire and outrageousness. These tropes give viewers a graspable familiarity and a dependable horror framework, amid much weirder gags.

What Dude Bro Party Massacre III does best is poke fun at “outdated” slasher blueprints from a place of obsession, and with an open heart. The DNA of its source inspirations flows through tubes filled with corn-syrup blood substitute and soupy fake puke. The film’s character motivations are a continually dumbfounding delight, a reaction to the genre flaws horror fans have become accustomed to scoffing at.

Dude Bro Party Massacre III is nothing but a good time, and watching it promotes a healthier relationship between viewers and the horror genre. Laughing at yourself and the things you love takes a certain kind of humility, which the horror genre benefits from as audiences reassess trends from past eras and movements. In holding the genre accountable for its flaws through humor and introspection, we can retain an appreciation for even the weaker parts of its history, and introduce evolutionary thinking about how filmmakers might drag something like The Slumber Party Massacre into a current slasher climate. Horror-comedies favor entertainment over frights, but they’re crucial to understanding the weaknesses of past horror movies, and pushing the genre to grow by putting it on trial.

The best horror comedies can exploit the past, keep the present in check, and laugh over the genre’s worst tropes and most enduring clichés, while still tickling audiences who love the films that are under fire, because the filmmakers might love those movies even more. Certainly that’s true of Dude Bro Party Massacre III, which winds up being the funniest horror-comedy of the last decade that most people haven’t seen — and maybe the most insightful.

Dude Bro Party Massacre III is streaming free on Tubi with ads, and is available for rental or purchase on digital platforms like Amazon. 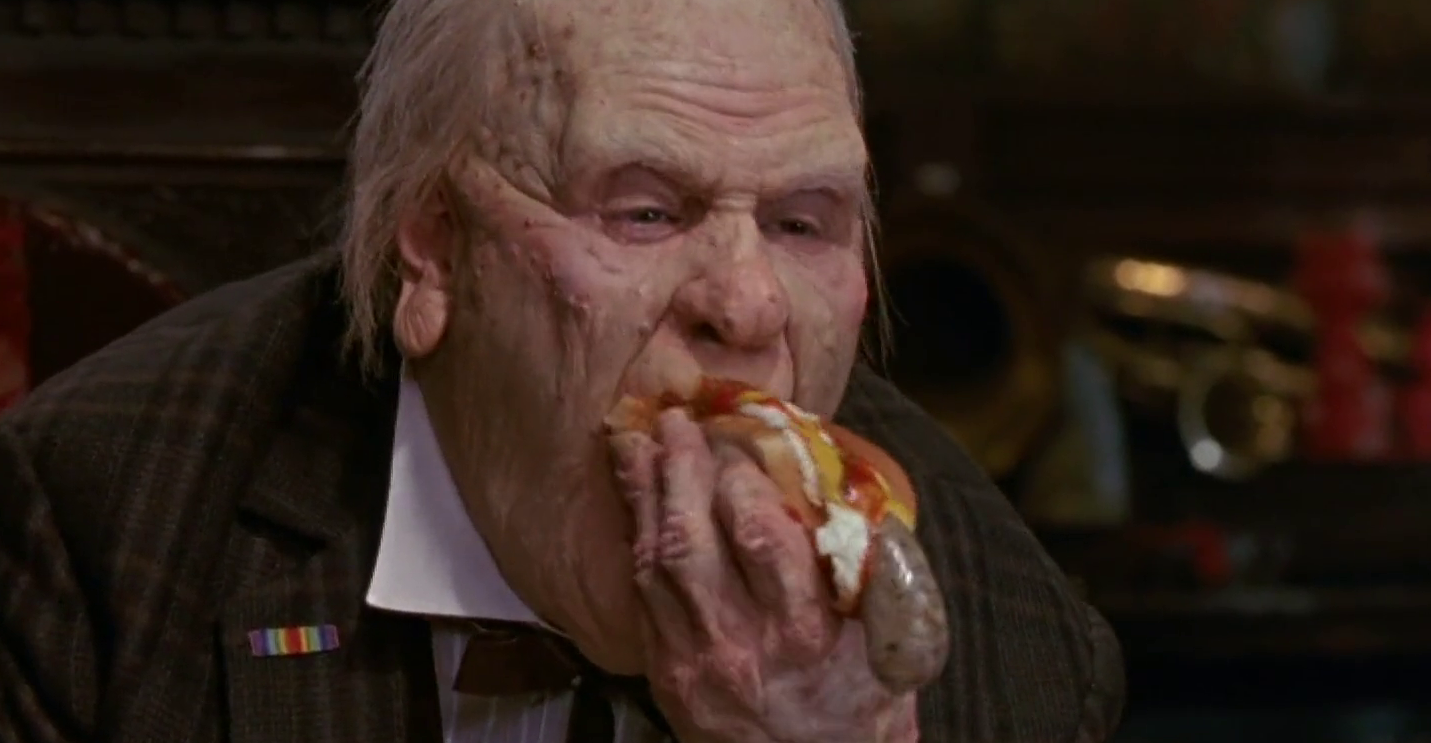